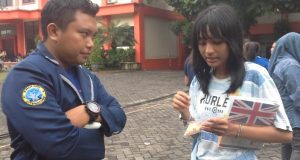 Malang Raya— On October 25-27, 2016 the students of English Language and Literature (Ellite) department conducted their annnual event named English Camp and the theme was “Let’s Internationalize People” in the main campus offices yard of University of Kanjuruhan Malang. The full English event was conducted for three days. This event was aimed to introduce the campus life and education to the Freshmen.

On this occasion the head of Ellite Dept. Trisno Tunggal, told the students that in Indonesia English is a foreign language that’s why the people of Indonesia are commonly strange to speak English in their daily activities. It is different from India, The Philiphine and even the nearest neighborhood country Malaysia, where it is common for the people of those countries to communicate using English in their daily life since English is their second language. In Indonesia it needs an extra bravery to practice English in front of public because commonly the public will mock the speaker. Their response usually ‘don’t pretend to be English,’ ‘don’t pretend to do so’ and so on.

To react this situation then the English Language and Literature Dept. of Unikama takes part to make English as a daily used language, at least in the department itself. We hope this annual event make the students of Ellite can practice English in their daily life and after finishing their study in Unikama they will be ready face competition in global society where English is the main language to be used.